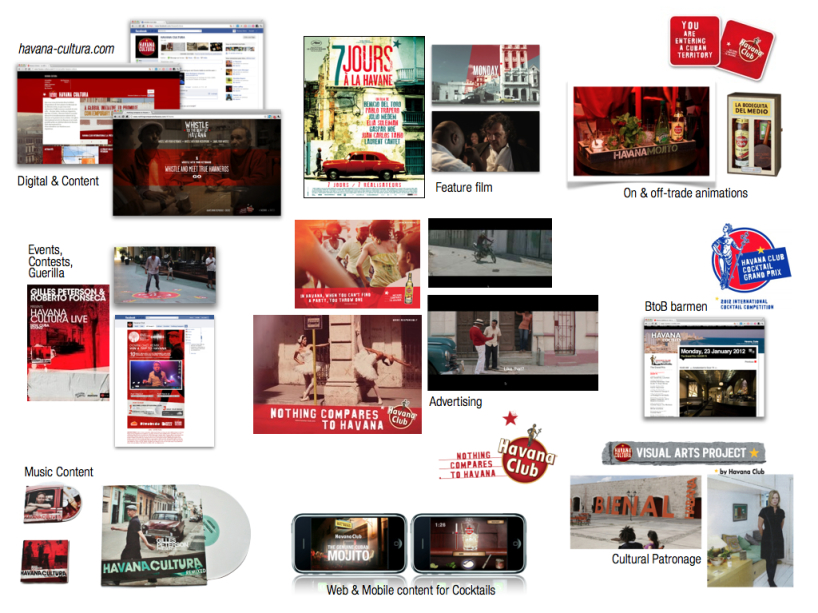 In 2009, Havana Club International set a clear ambition: let’s not try to become the second-best mainstream brand. Instead, aim at becoming an iconic premium brand, sold at a premium price. This was the brief to develop the new campaign, to be used in over 30 countries in the world.

As the only international Cuban brand, the strategy was to make Havana Club a « Cultural Brand »: the icon of the rich, vibrant and non-aligned Cuban culture.

Using Cuban culture and values to engage with our priority target of Urban Cultural Explorers », both premium spirit drinkers and opinion leaders, left main competitor Bacardi to the mainstream consumers.

The creative approach defined a new crusade for the brand to make people experience the incomparable human and artistic culture from contemporary Havana – designated HAVANIZATION. This comprised three core elements: « Havana Cultura », « Nothing Compares to Havana » and « 7 Days in Havana ».

Whatever the local market situations, Havana Club improved its market share, sales, and brand image against Bacardi. Havana Club even became leader in the booming rum market of Germany. The campaign gave the brand more Cuban authenticity which directly translated into perceived quality and originality that led to more recommendation and helped Havana Club to exceed all business objectives.

In the Drinks International Magazine 2012 yearly report, Havana Club was ranked #1 Hot Rum Brand for the 1st time, and even better, became the #1 brand in the Bartenders Top 10 for all spirits brands, beating iconic brands such as Absolut and Jack Daniel’s. This is the demonstration that Culture can turn brands into icons, generate value and ROI.